Art is the Center of the Real World

It’s impossible to walk around Philadelphia and not catch a glimpse of Isaiah Zagar’s work. His large, colorful mosaics cover hundreds of walls, and his distinctive style has become a hallmark of our city.

When our students saw images of Zagar’s mosaics in class, they recognized his work immediately.They began naming intersections, storefronts, and buildings in their neighborhoods and from their adventures in the city where they had seen similar works.

Then came the questions. What is it made out of? How long did it take? What does it mean? Why does it look like that? How many of these are there? Are they only in Philly? What’s Isaiah Zagar like?

Inquiry is where we always start.

My colleagues and I had never done a project like this. The four of us stood before the packed classroom, eager — and a little nervous — to see how something of this scope and scale would play out.

We were spearheading Challenge Week, a new school-wide initiative where all of SLA’s students would work in groups to participate in interdisciplinary projects that impacted our community beyond classroom walls. It was a massive undertaking that our staff agreed could have awesome outcomes.

We formed groups. Mine was comprised of three other teachers who taught a common group of 9th graders:

Together, we brainstormed project possibilities. We found common ground and came up with the bones of the project.

Our goals for Challenge Week would be to:

In the months leading up to Challenge Week, we spent a substantial amount of professional development time plotting and planning how to make this work. We needed to develop a timeline, procure materials, delegate roles, and determine how to make this experience meaningful for all students.

But, first, we needed to learn how to make a mosaic.

In a fortunate alignment of calendars, I was the one chosen to attend a Mosaic Workshop with the artist himself. The workshop took place a couple of months before SLA’s Challenge Week, so I would have time to process some insights that would help shape our project.

Over two beautiful days in April, we collaborated with Isaiah and his team to cut glass, break tile, mix grout, choose colors and designs, and implement it all onto a wall in South Philadelphia.

The artist, though, is a treasure.

Isaiah Zagar is boundlessly loving and kind. The weekend was full of hugs, kisses and smiles.. He possesses a true artist brain, always making and creating and seeing. He loved showing us around his studio, which is entirely covered in mosaics, inside and out.

He has built immense shelving structures to store more of his works, and he has more projects on the books than he can reasonably get to in the foreseeable future.

It’s cool to be living among an artist in the city whose contributions are being valued in his own time.

It wasn’t always like this. His trajectory as an artist is really interesting.

Isaiah spent three years in the Peace Corps in Peru during the 1960s. He met his wife there, and together they returned to Philly to continue working as artists. He worked on beautifying and revitalizing the South Street neighborhood. After mosaicking the entire interior and exterior of his studio space, he eventually excavated tunnels and grottos in the neighboring empty lot, which became the future site of the Philadelphia Magic Gardens.

Our students loved learning about his life in their research. They were especially intrigued by his drive and his passion.

Why does he have zillions of these mosaics in this same style?

They learned that the artist struggled with depression and had attempted suicide. He started to make mosaics as a kind of therapy, placing one tile at a time, making something beautiful out of broken and fragmented pieces.

During the workshop, Isaiah always demonstrated for us each step of the process himself, and did not turn instruction over to his helpers until everyone’s hands were already dirty. His apprentices are always learning from him, too, and with so many mosaics under his belt, his method is really the best way.

Mosaicking is cool like that. Anyone can do it, sure, but there’s undeniably an art and skill behind it.

Isaiah works quickly, placing tiles sort of blindly. He told us to never look into the bucket, but to just reach in, grab one, get it sticky, and put it on the wall.

Throughout the weekend, he was wholly involved in every step. He made the decisions, he drew the lines, he tiled, he grouted, he polished, he cleaned up. Reluctantly he would let his apprentices drive his van or lift a heavy bag of sand for him. He’s 77, after all.

Here is the finished mosaic with the workshop crew.

My favorite detail is the tiny clown figure in the bottom left. It’s based on a graffiti doodle Isaiah saw earlier in the day. It amused him, so he incorporated it.

On the final day we went out for a late lunch to celebrate a finished job. Isaiah left a bit early to return to the studio while the rest of us lingered over our margaritas and ceviche. I eventually got myself up and made my way back to my bike, aching, exhausted from the sun, my clothes and body flecked in colorful grout; I couldn’t wait to go home to shower and lie in bed for the rest of the day. As I passed the studio, I noticed the back door propped open and decided to stop back in to say thank you and goodbye. Isaiah did not have his feet up like I imagined he would; he was already mixing in buckets and gathering materials for the next project.

He doesn’t just love the work; he is the work.

You can imagine how it would be a bit tricky to spin this workshop experience with the artist himself into a meaningful learning adventure for a busload of teenagers.

Fast forward to June. Challenge Week took place in the days following the closing of the district gradebook. Those school days are historically weird; since the quarter is already over, there can’t be any graded assignments, and teachers often scramble to think of stakes-free ways to keep students engaged.

We would have four days to bring our project to life. Here is how we broke it down:

Having started our inquiry earlier, we took the students on a field trip to the Philadelphia Magic Gardens, where they promptly lost their minds.

In the best way.

The scale alone is breathtaking.

They asked their questions and formed new ones.

Among them: Can we start now? Do we have to wait until tomorrow?

We met in a classroom at SLA and began discussing the process for our mosaic. Students broke into groups and drew sketches for the mosaic based on our school community, their lived experiences, and the inspiration they gathered from Isaiah Zagar’s work. We talked a lot about the weekend’s tragedy in Orlando.

Some common ideas emerged from the discussions: Unity. Art. Spirituality. Equality and peace among people of all backgrounds and genders. Our shared humanity.

Some students took ownership of the design process, incorporating lots of the smaller groups’ ideas into a few larger options. We openly discussed the outcomes.

Yaara, one of Isaiah’s helpers (whom I was lucky enough to meet and learn from during the workshop) came by to offer support. She showed students how to cut mirror into rectangles.

And how to break tile into mosaicking chunks.

And, once we had buckets full of pieces, how to arrange them onto our wall.

It was a bit chaotic with 60 students on the sidewalk, but by the end of the day, our mosaic was fully under way.

It was awesome to walk past our half-done mosaic on the way to school the following morning. With our tiles adhered to the wall, it was time to mix the grout. This was, by far, the messiest step.

Students didn’t seem to mind too much that their clothes and shoes were temporarily ruined by this process. They transformed the wall into various shades of pink and purple for hours.

While the grouting crew was elbow-deep, other groups of students took on different tasks. One group prepared speeches for the next day’s ribbon-cutting ceremony. Another group functioned as ambassadors to the community, creating invitations for local residents and business owners to attend. Some students began writing thank-you cards for all of the people who helped us bring the project to life. Others pulled together the photographs and the documentation to craft a blog post about our project for the school website.

At the end of a very long day, we were ready to present. All of it took a lot longer than expected, and some students stayed well after the normal dismissal time to see the job through.

To a very full house (err, sidewalk), the students ran the show in welcoming guests and introducing the finished mosaic. They spoke of the inspiration behind the project and explained the details of what was on the wall.

A student wrapped up the speeches before the ribbon-cutting:

I just want to thank everyone for coming out to support our students. They’ve taken the time to really show everyone who walks by this mosaic that Philadelphia truly is the center of the art world and that art is the center of the real world. That has to be true because because there’s no place realer than Philly. We as a school want people to look into the mirrors on this wall and and see more than themselves. We want them to see that anyone can create. Anyone can can take something like broken glass or broken tile and makes something beautiful like what we at SLA did here this week.

Cars on 22nd Street slowed down or pulled over or honked. It was awesome.

Lots of photos were snapped. Walking back into the building, I overheard some students talking about how they would definitely take their prom photos in front of the mosaic when they’re seniors.

And my heart melted a little.

We returned to the classroom and debriefed. We gave each other shout-outs and thank-yous. We talked about our favorite moments and our biggest challenges and the final outcomes.

These same 60 students had been in my English class all year. Working on a project like this made me see many of them from a new perspective, completely apart from our usual four walls and books and documents. Engagement shifted. Leadership roles were different. Some students stepped up, and others stepped back. Some were totally in their element, and others pushed themselves to make the most of a challenging new experience.

It’s a powerful opportunity to teach and learn outside the regular parameters of school. I’m not sure how Challenge Week will play out in future years at SLA, but I think we’ve all seen the value in exploring a new avenue for learning. That school doesn’t really mean any single thing. That the work and world of high school is the real world. Perhaps, even, with art at the center.

All posts by Amal Giknis 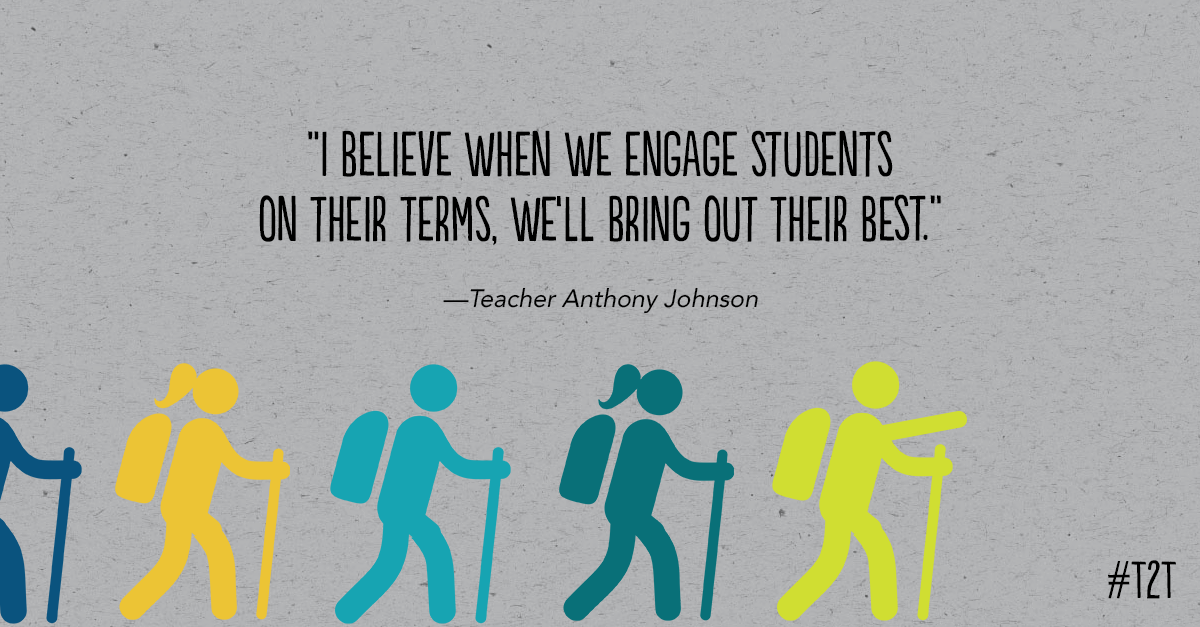 Building a Culture of Family

"I wanted to create an environment that would get kids excited."

“Your students are your best resource”

All these kids, I just can’t wait to see what they can do.

Email us
info@teacher2teacher.education
Supported by