Our Corner of the World

Our Corner of the World: Margaret Noble and Rachel Nichols

An exploration of the cultural experiences and challenges encountered by teens today, the project was tackled in two parts—one per semester of the 2015-2016 school year. First, the students developed an in-depth research paper, closely analyzing a topic of their choice. Then, the students were asked to create interactive art—rooted in computer programming and design—to communicate their findings to the public.

Rachel: My parents are public school teachers and I’m in my 16th year. I love it—it’s the greatest job on Earth. You know, I’ve had a few moments in my life when people have asked me, “What is it you’ve always wanted to do?” Honestly, it sounds cheesy, but this is what I want to do. I get to have a laugh every single day, I get to work with young people, I’m always learning something new—it’s just a lot of fun. It’s very difficult, but it’s a lot of fun.

Margaret: I never really feel like I’m the teacher—it’s so rare that I’m up there lecturing. I’m definitely more of a producer, a facilitator, a supplier of resources.

I’m still a practicing artist—I still exhibit. My work as an educator is really an enhancement. For me, it’s such a great fit—to share my passion for creative work, but also to help students experience what it means to make something that matters.

High Tech High really encourages interdisciplinary work, so I’ve collaborated with environmental science teachers, humanities teachers, math teachers—I’ve worked solo and with the community. Everything is always research-based, with the work manifesting as a media project.

[Rachel] and I have shared interests. We tested our work in the classroom together in 2012. We liked the results, so—we kept going.

Margaret: For me, teenagers are such unique individuals. They’re almost adults, but they still have capacities that need to be developed, and they’re wrestling with really complex emotions in this kind of “no man’s” land—there are expectations around being mature, yet they’re still kids. I just think that’s a fascinating state of human existence, and I realized I don’t know enough about them.

I picked up a few books about the history of the teenager—what’s happened with teenagers and culture over the years. It got me thinking that they have such a unique set of information that isn’t typically honored. I really wanted to look at the kind of knowledge they’re holding and understand what’s important to them. Also, to let them know that they’re important, and to give them a chance to look at their own world.

Rachel: So, we threw it out there, “You were born in 1999—what does it actually look like from where you’re standing? What do we know about the 21st-century teen and what do you want to know more about?” [The students] picked a topic that they want to research and then we grouped them by topic. For example, a lot of students were very interested in depression—how often does it occur in teenagers? Is it temporary or is it long-term? What does it look like for a teen?

It was really a beast of a project. They had to write an extensive research paper, turn their main findings into code and then have that computer code artistically represent their work. For an audience. All in one semester.

You know, I’m a dinosaur—what I’d be comfortable doing is sitting in a room with students, reading books, then we’d talk about it. But, students know more about technology than I do, so it’s great to let them be my teacher and say, “Okay, we’re going to do a project—how do you want to represent this?” They’re going to have great ideas, and they’re going to be invested.

Being more like a guide than the keeper of all knowledge—you know, the sage on the stage—it’s key to having an interesting and authentic classroom. We have to be open to new ideas if we’re going to ask students to be.

Margaret: While Rachel is facilitating the research and the thesis—the final mastery of knowledge around a specific topic—simultaneously, I’m facilitating technical skills. You know, how to make a thing. We have a few public presentations in class, really vetting the topics. Then, I begin the production phase—that’s over a semester.

The workload is pretty substantial throughout this process. We do try and give them models to look at, but often we don’t have an exact model, so that’s some challenging thinking to put forth.

Rachel: It’s a different kind of world—you have to be able to represent your thoughts and ideas in ways that are relevant today, and technology is the literacy of the 21st century. It seems silly that you wouldn’t teach teens the skills of their generation.

I’ve worked with Margaret many times before, so we really have it down. I understand her, she understands me—even if we’re a bit like the odd couple. She’s very, very organized and I’m sort of the messy one with food on my shirt like, “Oh, we’ll be there in a minute”—that sort of thing. But I adore her. I love working with her and I think she brings out the best in students.

Margaret: Just as we ask our students to endure the great challenges of communication and collaboration, we have to navigate in such a way that we make sure each other’s needs are being met, [as well as] our own needs in the classroom. It’s a very different experience for her to facilitate a rigorous research paper than for me to teach basic programming skills and get students to make a thing.

A lot of times, kids will come up against problems that I don’t have the answers to, but I know how to find the answers. I think it almost serves their learning better—not having a lot of super technical experts hovering over them, just being the answer. Now, they actually have to find them.

Rachel: We know we’re doing a project right if in the first few weeks we kind of look at each other and say, “Oh my gosh, is this going to work?” You’ll have these sort of terrifying moments when you’re thinking, “We’re not going to be able to finish,” or “this is going to look like a hot mess.” But, that’s a good sign, because that means you’re really challenging everybody. The students are challenged, you’re challenged, and they usually pull through really beautifully. I don’t believe in senioritis—I have a grandfather who lived to be 99 and if he didn’t have senioritis, then nobody gets to have senioritis.

Margaret: I don’t always know where we were going to head—what creative structure they’re going to pitch. It’s so experimental and it’s so messy, which is always really worrying in the middle. But, I think you have to make a mess to make good work, and that’s why critique and revision are so important.

I knew technology was going to be big, because that’s just the world we’re living in now. I was impressed that they were so reflective—in a variety of ways—about how technology impacts their life, for the good or for the bad. There were also a lot of projects about female identity, female pressures, sexism—I was really pleased to see those projects exposed to [everybody] in our classroom.

Everything seemed sincere—like they believed in what they were doing. Maybe it was reassuring to know that they also have the same concerns that we have for them. Rachel: We hold public exhibitions in the evening, so they all talk for two minutes, inviting people to come see the computer programs that they made from scratch and discuss whatever issue it is they researched. It was a really interesting exhibition because people—you know, adults—left thinking, “Wow, I didn’t even think about that.”

One of the groups wanted to show how stress impacts decision-making. So, you’d actually see, via a computer screen, what their cellphone looks like throughout the day, and you’d have to make quick decisions or you were kicked out of the game. It just shows the time in which students are making really important decisions. It’s not like the mail and you have a couple days to respond, it’s a text. “Are you coming or are you not?” There’s no time to think. The projects just had to be interactive, so it wasn’t just a matter of standing and watching, but actually doing.

Margaret: I think it’s a complex experience because some of the things that they had to say—it’s not comfortable. “I want to get into college but I’m really stressed out.” A lot of these conversations didn’t happen until the exhibition, so I think it was cathartic. I also just think it’s so important that adults honor students’ feelings, and this was an opportunity for that to happen.

Margaret: I think my ultimate vision for all of the projects is that I want them to know what it feels like to make something that is relevant and with excellence, because I think that feeling of achievement will serve them for the rest of their lives.

Of course, it’s hard work—we’re definitely are pushing them. They’re going to these critiques and that can be painful—you thought you were communicating something and it turns out that your peers didn’t really understand it, so you have to change your work. That’s a humbling experience. But to endure that, to grow through that and think, “Wait a minute—I really did pull off something that matters,” the return is that people were genuinely interested.

Rachel: When only the teacher sees a student’s work, it’s such a missed opportunity for the community because teenagers are extraordinary. And, if we keep them hidden behind school walls then it’s easy to judge them. Now, if you show off how awesome they are, how capable they are and how willing they are, then it’s a real gift to the community.

Margaret: It’s just a blessing to work with 12th graders because they are so advanced and they’re so open. I just see myself as building on the work of all the educators that came before me, and I’m so grateful for all the work they did. By the time I get the 12th graders, they are in peak performance, capable of doing the most interesting work—and I always let them know that.

Connect with Margaret on Twitter @noble_sounds or on her website, nobleeducator.com. Connect with Rachel on her website, www.rnichols.org. The “Making of the Modern Teen” project was powered by Think It Up; visit thinkitup.org to learn more and start your own project. 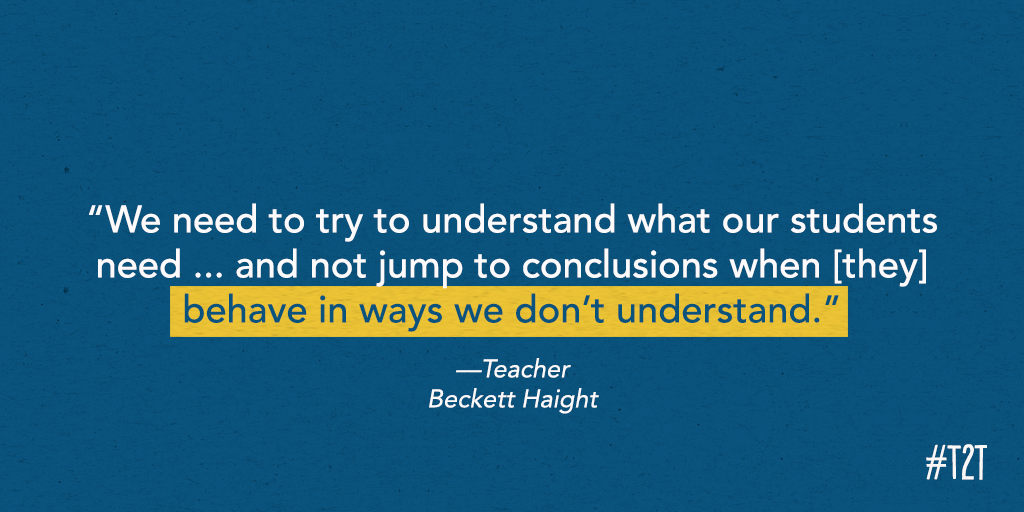 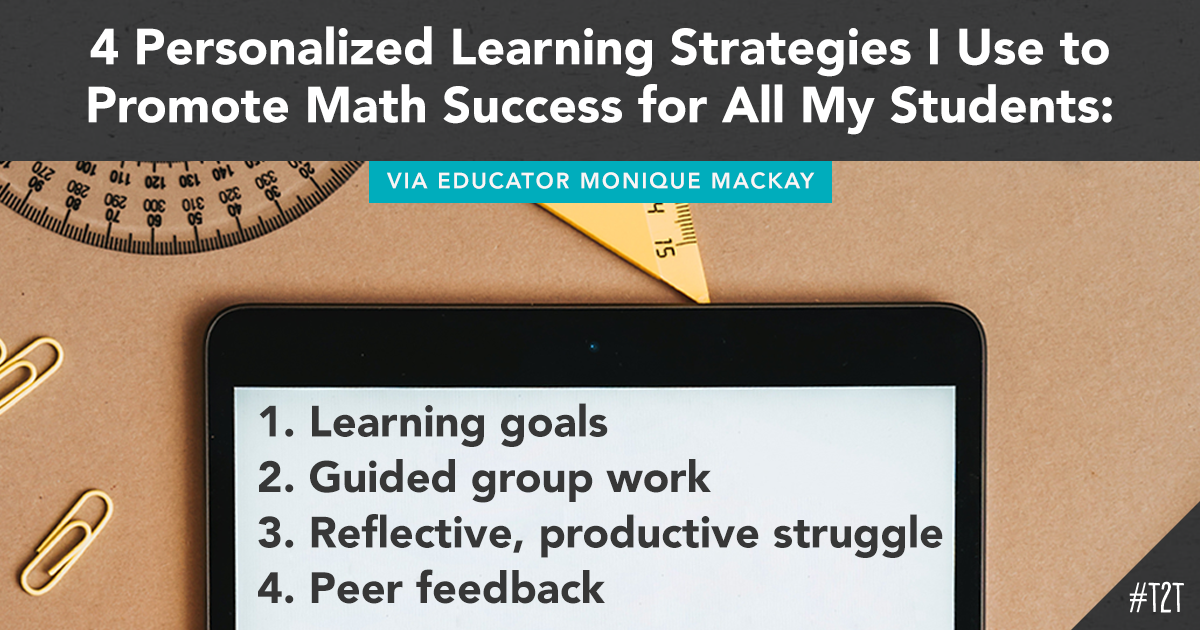 How I Make Math Feel Empowering & Exciting for Every Student

I believe that in order to inspire students to grow in mathematics, we have to personalize their math experiences – and we also need to bu... 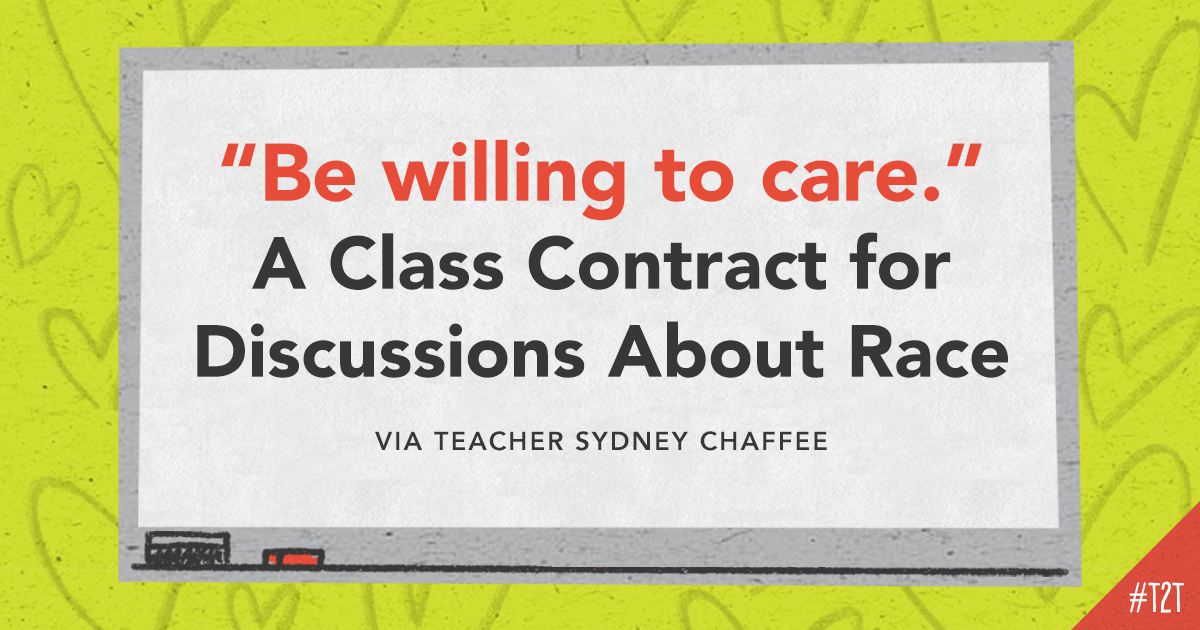 “Be willing to care.” A Class Contract for Discussions About Race

Last year, as we tackled some complex topics, I invited my students to create a “community contract” that specifically defined what we w...