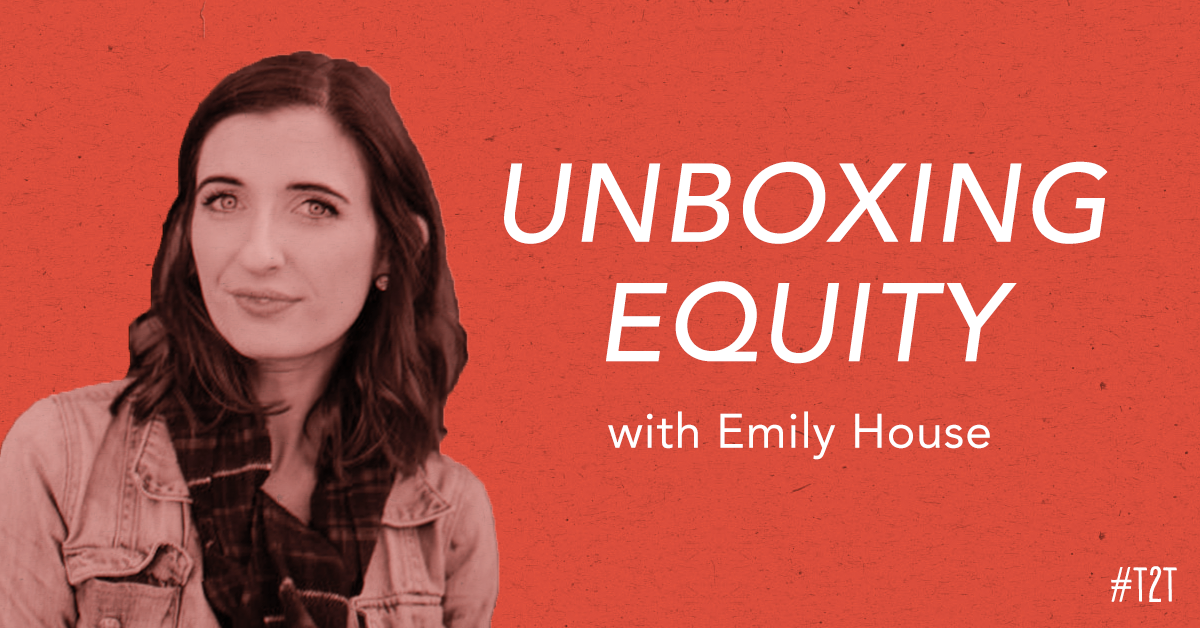 I grew up going to rural Iowa schools, and diversity wasn’t a big part of my educational background. As a teacher, I’ve realized how many different experiences exist even within a single classroom – and how few of those experiences are like mine. It’s been a humbling wake-up call.

I’m continuously learning and getting pushed as a teacher, and a big part of that has been asking questions and educating myself. For example, a few years ago I heard NPR’s podcast “The Problem We All Live With” about how segregation is continuing today, and I was broken, wondering, “What? How is this happening?” My seventh graders were working on a research project at the time, and I decided to build my teacher model project on segregation. The next year, I got a little braver and told the kids, “Okay, you’re going to research social justice issues, too.”

I started digging in and researching forces at play in our culture and community, and I’ve invited my students to join me as I’ve gained more confidence. Now, my whole school year is framed by questions like: What is privilege? What is social justice? What is cultural currency? What are the forces driving society, and how can we recognize them in literature and in the news? How can we get more involved in bringing about change?

A lot of the conversations in my classroom start with building vocabulary. I present a term like “privilege,” and my students and I look closely at what it really means – first just as a word, and then as a force working all around us. We discuss privilege issues we see in novels. We read informational articles and discuss terms like bias and how authors reveal their biases. We work on uncovering our own biases, too!

At first I thought these conversations would only grow out of novels that are really explicitly focused on issues of privilege. But by starting with more expected novels, like “The Hate U Give,” and then introducing students to dystopian novels like
“The Hunger Games,” or even classics like “Of Mice and Men,” they start to see: “Oh, these books actually address some of the same things.” They begin to recognize the ways literature deals with systems of power and privilege. They start to recognize patterns.

There is usually some resistance among students who are new to these conversations. They don’t feel safe, because these discussions are uncharted territory for them.

I do a lot of prep work to try to make the conversations feel safer, which I think is always key to success. It’s like the climate control in the room.

I implemented a lesson from Facing History called Preparing Students for Difficult Conversations. I asked students to write a private journal entry: “I mostly feel ___ when discussing race.” I gave them permission to write down their answer and then literally ball up the paper and throw it away. I’d rather have them have an honest answer in their heads than have an answer they think I want to hear.

The next step was a group conversation, in which we brainstormed how we thought our classmates might be feeling. I had my doubts about how this would go, but they were very open. Kids wrote words like awkward, uncomfortable, angry, scared, sad, confused and nervous. We took a minute to talk about feelings.

I added something that wasn’t in the lesson plan: a conversation about how negative feelings can be acted out in negative ways. When we feel nervous and awkward and scared, we’re not going to show that to our fifteen-year-old classmates. We’re going to save face by acting out. So I tell them to just be aware that when we want to be angry and lash out, there’s something more complicated going on. We need to sit with those feelings for a minute and think about what is actually going on for us. And if a classmate does lash out, we can try to remember they are probably not actually angry with us – they are probably scared and uncomfortable.

The school where I teach is in an upper middle class area, and it’s not very diverse in terms of race or socioeconomic status. We talked about what racism is, and we acknowledged that sometimes bias doesn’t come out of hate. It can come out of ignorance. I asked, “If that ignorance comes out, how do we want to address that?” It culminated in a big class contract about how we want to move forward together.

After all that emotional activity, we posted those contracts up in the room. When we’re reading a text that deals with difficult issues, or encountering some other tense moment, I will pause and say, “Okay, this might be one of those conversations where we say something that sounds ignorant. But we’re going to educate each other.” So far, it’s worked pretty well. Nothing has come up that I haven’t felt prepared to navigate. Sometimes I can read the room and sense emotions rising, and I’ll have everyone stand up and face each other. There is something about being able to see each other that helps them be a little more mindful about what they are saying.

Over the years, I’ve realized I don’t just teach English. I teach the kid whose dad is in jail, and at the same time I teach the kid who hasn’t had to deal with huge challenges in life and who needs to learn how to be more empathetic. We’re all on this learning journey together.

All posts by Emily House